in the segment row.

Statistics show the segment coverage and the distribution of users in it by gender, age, location and types of devices used. Also, you can see similarities between users in the segment, their common categories and interests, statistics for sites and Yandex.Metrica goals.

Similarity shows how similar users in the same segment are to each other in terms of internet behavior. Similarity is based on the visited sites, search query categories, and social and demographic profile (gender, age, city of residence and other characteristics). The higher the similarity, the more uniform behavior the segment users have. This type of segment works well for the similar users search. Low similarity means that the segment includes heterogeneous users (young and old, with low and high income, from different cities, and so on). It is hard to find common features in a segment like this, so the users found will also be different.

Use site statistics to learn the percentage of users in the segment who visited the site or reached the Yandex.Metrika goals. You can configure statistics in the Main tab any time after the segment is created.

Specify the tag and up to three Yandex.Metrika goals. You can use your own tags and Yandex.Metrica goals or tags and goals to which you have guest editing access or representative's access. It takes several hours to collect the statistics.

For example, you received the following site data: 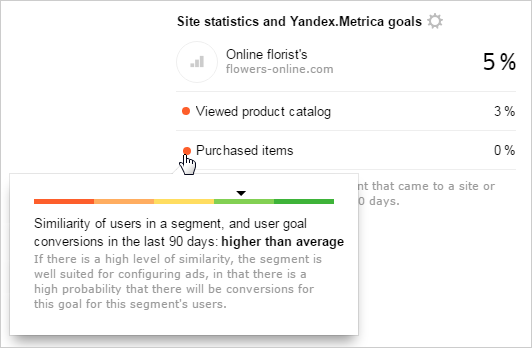 Statistics show that some users in the segment visited your site and viewed the catalog but didn't buy anything. Also, they are similar to those who bought products on the site. There is a high probability that users in this segment will be interested in buying something. These people can be shown ads about special offers and discounts.

In the Interests and categories tab, you can view what internet users are interested in, and what category they might belong to. The affinity index is calculated for each topic and category. This indicates how strongly the topic interests users from a certain category compared to internet users on average.

For example, you received the following segment data:

Was the article useful?
Please specify why
Thank you for your feedback!
Please tell us what you didn't like about this article:
Previous
Managing access
Next
File requirements
You can also go to